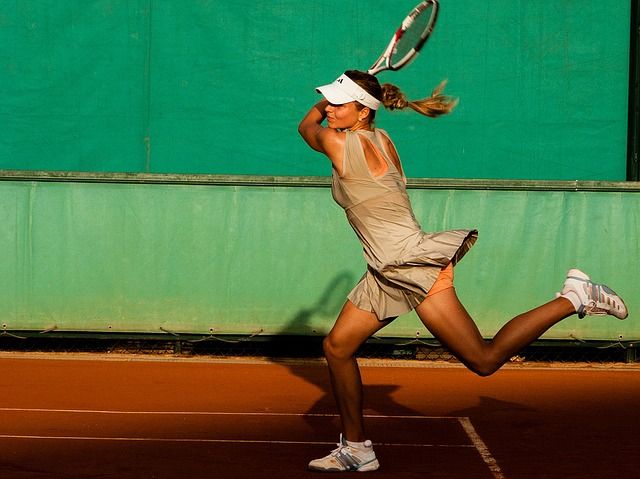 Written on 27th June 2016. Posted in Uncategorised. Leave a Comment

Tennis is without doubt one of the most popular summer sports around- both social and an effective form of exercise (plus, if tennis means Wimbledon that also means strawberries and Pimms- can’t go wrong there!)

As a recreational activity, tennis players do subject their bodies to stresses through ballistic movements and repetitive motions. Whilst these often occur at specific parts of the body (tennis elbow, we’re thinking of you here) these can be the catalyst for more widespread challenges, because dysfunction in one joint can impact significantly on others.

The most common injury we tend to associate with tennis is, of course, tennis elbow (read about that here), but the ankle, hip, lower back and shoulder are also susceptible to injury, be it tendon injuries, plantar fasciitis or muscle tears. Stress fractures (caused by repetitive loading of the upper extremity) are also widely reported, and there are even rare vascular injuries reported, likely due to the compression of the large vessels in the armpit whilst serving.
Tennis is physically demanding with lots of sprinting, flexion, rotation, extension and lateral bending of the spine and related joints, and so a certain level of fitness is critical to help withstand the repetitive stop-start movements, bending, twisting and rotation. When we see a tennis player in clinic we also have to consider the dominant side of the person, as these repetitive motions can lead to one-sided disorders. In fact, when looking at a tennis player it is often easy to spot
whether they are left- or right-handed simply by looking at muscle tone and size!

The ankle is often injured in tennis due to shearing forces that occur at the subtalar joints. The plant-pivot action often seen in tennis players causes translational distortions throughout the rest of the body, not to mention repetitive shock absorption, and in turn these lead to dysfunction both locally and in more widespread joints and tissues due to compensatory changes. For example- repetitive shear forces through the ankle can cause altered gait biomechanics, which in turn can compromise the stability of the pelvis and the lower back, leaving the player with not only an ankle injury, but also potentially other problems in his pelvis, hips or lower back.

We’ve all seen a tennis player serve- the racket moves over the head and behind the body whilst the spine flexes laterally and hyperextends- the trunk must then be brought into very rapid flexion to smash the ball, whilst very high velocity rotation causes a corkscrewing motion through the spine, transferring force and torque (twisting) into the spinal segments. The tennis serve places more load and stress on the spinal structures than any other stroke in tennis, and these shearing forces can lead the lower back susceptible to injury. Think of Andy Murray and his microdiscectomy surgery on his lower back in 2013- the large forces transmitted through the lumbar spine can cause intermittent lower back pain that can eventually lead to retiring from the game.

In addition to ankle and lower back problems, the shoulder also has to work hard during the serve to stabilise the glenohumeral joint when it is extended, preparing to serve. This relies almost completely on the rotator cuff muscles, who not only have to stabilise the shoulder but also cope with the added issue of the tennis racket- which further increases the distance from the shoulder to the moment of impact in the centre of the racket. When the rotator cuff muscles are weak, there is excessive “play” in the movement of the joint in the shoulder socket, causing irritation in the surrounding tissues.

So how do we avoid injuries?

Written on 20th January 2015. Posted in Uncategorised. Leave a Comment

We’re delighted to welcome the first of our guest blog writers.  Nicola Russell is a registered Nutritional Therapist based in Midhurst, who works closely with her clients to address how optimum nutrition can be the key to a healthy lifestyle.

The doctor of the future will give no medicine, but will interest his patients in the care of the human frame, in proper diet, and in the cause and prevention of disease

“I became interested in Chiropractic care after suffering from a bad back in my early 20’s following a fall from a horse when I was younger.  However, I have continued seeing chiropractors from that p

oint onwards as I came to understand that keeping my spine, joints and muscles flexible and moving freely ensures my body stays pain-free and able to cope with what I ask of it during day-to-day life.  Chiropractic care is not just for bad backs!

Nutritional Therapy looks at addressing nutritional imbalances which also effects chemical reactions and bodily functions, and works with clients on many levels to support the body towards healing itself.  Co-management of certain clients therefore makes sense and I think Chiropractic care and Nutritional Therapy naturally go hand in hand.

For those already suffering from musculoskeletal complaints, dietary modification could help with pain management.  For example, insulin resistance (a precursor to diabetes) is implicated in the pathophysiology of Metabolic Syndrome (a collection of risk factors that can lead to diabetes, stroke

and heart diseases) which may be linked to musculoskeletal pain (Seaman & Palombo, 2014).  An elevated body mass index could also indicate a pro-inflammatory boy chemistry and be seen as a potential initiator/promoter of pain too (Seaman, 2013) and it therefore may be incumbent upon chiropractors to identify those at risk and refer them on.   Insulin resistance, weight gain and other conditions can be reversed with the help of a Nutritional Therapist though the use of multiple strategies such as dietary and lifestyle modifications.

Chiropractors also work to encourage dietary and lifestyle modifications as they have recognised the importance of looking at the whole person in order to obtain optimum health.  I believe that proper nutrition, chiropractic care and regular exercise are the keys to good health!

If you would like any help or information about how nutritional therapy could help you, please contact nicola@thewaytoeat.co.uk

Seaman, D. and Palombo, A. (2014) ‘An overview of the identification and management of the metabolic syndrome in chiropractic practice’ Journal of Chiropractic Medicine 13(3): 210-9